All tequilas are mezcal, but not all mezcals are tequila, discover the difference between them. And don’t forget to visit Mamazul: The house of Mezcal in Tulum.

Mezcal and Tequila actually, are the most popular drinks in bars of Mexico. These products are distilled from agave, and they are often used in popular cocktails such as Tequila sunrise or Mezcal Stalk. However, there are some differences between this drinks. Keep reading and discover them!

This article may interest you: Is there a correct way to drink mezcal?

They’re made with different kinds of agave.

According to Mexican appellations of origin, Tequila is a type of mezcal, which is made from only blue agave, instead Mezcal is defined as any agave-based liquor, because these can be made from any of the 30 distillable types of agave. The most common varieties of agave used for mezcal are espadin, tobala, cuishe and tepeztate, this represents up to 90% of mezcal.

In other words, tequila is a type of mescal, but a mezcal is not always a tequila.

Tequila and mezcal primarily comes from different regions of Mexico.

Tequila is produced in five states of Mexico: Michoacán, Guanajuato, Nayarit, Tamaulipas and Jalisco, which is where the actual town of Tequila is located. 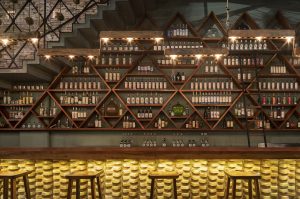 The Best Mezcal Collection in Tulum

Both drinks are harvested from the agave plant, known colloquially as “piña.”, but the difference lies in its production form.

Tequila is typically produced by steaming agave in industrial ovens before distilling it two or three times in copper pots. Mezcal, on the other hand, is cooked in mud pits covered with lava rocks and filled with wood and charcoal before being distilled in clay pots. While some large-scale mezcal producers have embraced modern methods, artisanal mezcal producers continue to use this more traditional method, which is the source of the smoke commonly associated with mezcal.

Once the distillation process is finished, the tequila and mezcal are stored for different periods. Hence, its classification:

Mezcal is also grouped into four categories, including joven (0-2 months), reposado (2-12 months), añejo (at least one year) and matured in glass (underground and for at least 12 months).

Testing Tequila and Mezcal in Mamazul.

As we already mentioned, there are some differences between these ancient Mexican drinks. But the best way to understand how these differences affect the flavor of mezcal and tequila, we recommend you try several varieties of each at Mezcaleria Mamazul in Tulum. We have more than 300 mezcals in exhibition!